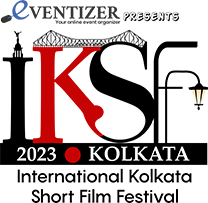 ⦿ Entry fees Non- Refundable
⦿ The film/video can be of any language or of any genre. All non-English films must have English subtitles
⦿ The decision of the festival committee and jury members will be considered final.
⦿ All information will be given on the Festival’s Facebook page, or an attempt will be made to contact by mail.

International Kolkata Short Film Festival which will take place for the third time from 10 January 2023 to 15 January 2023, is now open for entries. The IKSFF will strive to screen short movies. We would like to invite both professional (established broadcasters, film or television production companies/distributors, and independent filmmakers) and non-professional filmmakers from anywhere in the world to participate in the festival. The festival and judgment of the competition will take place in Kolkata, India.

1.2 About EVENTIZER: Eventizer is an online ticketing platform that helps promote, showcase, and ticket various events online and is also intended to nourish online events and digital festivals of different colors. Short Film Makers can also showcase their films with ticketing through Eventizer.

>> All the films Submitted by Film Makers to the Festival under Short Film, Short Documentary, Short Animation, Music Video, Advertisement/Commercials, Public Service Announcement Categories, and Created after 1 January 2017 will be included under the Competition Section of the festival program. If any filmmaker wants the screening of his/her film which is completed before 2017, it will be accepted but will be excluded from the competition.

Participation in the IKSFF -2023 implies acceptance of the Rules and Regulations by filmmakers, producers, and their agents.

The final deadline for submitting the films is 15 December 2022. The films which will be submitted after the mentioned date will not be accepted by the Festival Authority.

2.3 Submission Materials
None of the above-listed submission materials will be returned.

2.4 Selection
Festival programmers select and invite all films presented at the festival. Films selected for the IKSFF-2023 will be announced before the festival date on our website. Filmmakers selected to participate will be notified prior to this date. The nominated film list will be published on the website and on our official Facebook page.

3. SELECTED FILMS
3.1 Participant’s obligation
Participation in the festival requires unconditional adherence to its regulations as set out here.

3.3.1 Required catalog materials
In order to compile the Festival Catalogue for each selected film, the Festival must receive a duly completed entry form and press kit. The requested materials should be sent/submitted as soon as possible upon acceptance of the invitation. The Festival accepts no liability in the event that its publications reproduce inaccuracies in submitted materials.

3.3.3 Catalogue Writings
Catalogue writings are entirely at the discretion of the Festival.

3.4 Publicity Materials
The contact persons of the films participating in the Festival will receive a request from the Press office to send publicity materials. These materials will be used in Festival publications and for distribution to the press and festival guests. Each film should be submitted with a trailer of 20 seconds.

3.4.1 Excerpts
After the official selection of a film, the Festival is qualified to use excerpts from the film, with a maximum of 3 minutes or a total duration of the excerpts not exceeding more than 10% of the running time of the film, for promotional purposes both nationally and internationally. In the event that excerpts are not available, and it’s being understood that under no circumstances the entire print may be lent out, the Festival is qualified to copy, under its strict supervision, one or more excerpts from the film for promotional use prior to, during and after the Festival.

3.4.2 Promotion
For the promotion of the entire selection and of each selected film, the Festival website is allowed to use any photo or digital film clip (less than 3 minutes duration or the total duration of the excerpts not exceeding more than 10% of the film running time). The 20-second trailer of the film may be used for promotion.

3.5 Programming
General scheduling and the timetabling of public screenings are entirely at the discretion of the Festival Management.

3.6 Subtitling
Selected films will be screened in their original version. In principle, if not with English dialogues, films must be subtitled in ENGLISH. An electronic subtitling system should not be used for any film.

4.0 Use of the Submission Materials:

4.1 Promotion: IKSFF/Eventizer will promote the festival and its awards by featuring extracts from submission on radio, television, and digital media throughout the world. IKSFF reserves the right to use the extracts of all submissions in these promotional activities.

4.2 Screening: IKSFF/Eventizer is entitled to screen the submitted productions both Online and Offline to the public during and after the festival for an unlimited period of time for both Commercial and Non-commercial purposes.

4.3 Images: Entrants warrant that IKSFF is entitled to use all the submitted images for promotional activity of the Festival throughout the world in different digital media for an unlimited period of time without making any payment for such usage.

4.5 Film Library: All submissions will be retained at IKSFF World Film Library for educational and archival purposes. For such purposes, IKSFF does not pay any fees to entrants.

4.6 Editing: IKSFF reserves the right to edit the information supplied by the Entrants for publication in the Festival Souvenir (For both Online & Printed versions)

There will be three rounds of Judging

Round A: In this round, A IKSFF Jury panel will decide whether the film covers all the entry guidelines properly. Then the panel will shortlist the best movies and prepare a list of 100 films for Round B.

Round B: In this round, the Screening Committee will decide the Nomination. A list of nominated films will be decided in this round.

Final Round: In this round, the full bench of Judges with the Festival Director, Festival Chairman, Festival Executive Director, Chief Advisor, Chairman of the Screening Committee will decide the Films for Awards in a different category.